I went to Kronstadt, an island city with a long history, yesterday. I have a lot of photos to go through, but I’m posting a quick taste of what’s to come. 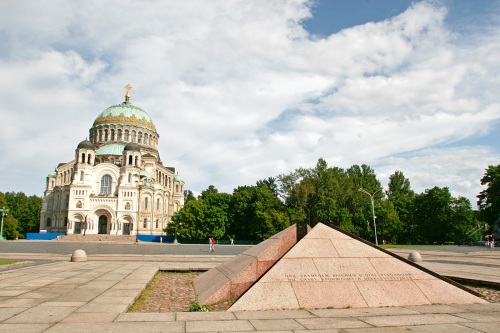 The Kronstadt Naval Cathedral stands behind a monument to Kronstadt's roles in the uprisings of 1905-06 and 1917, and in the Russian Civil War.

The Naval Cathedral rises high above the rest of Kronstadt, distinctly visible from the long dam and bridge that connects the island to the mainland. Completed in 1913, the cathedral saw only 16 years of use before being closed in 1929. It was ransacked and defaced the next year, before being converted to a movie theater and later, a community center. In 2002, the Russian government placed a new cross atop the cathedral, and in 2005, the cathedral was reopened for services. However, the cathedral is now closed for extensive renovations.