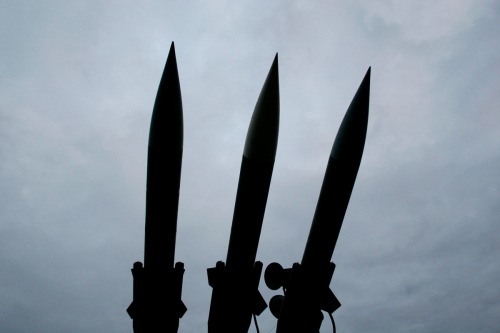 Click here to see photographs from the Artillery Museum in St. Petersburg.

People eat next to a Soviet T-80 tank.

The Artillery Museum in St. Petersburg is billed as a great place to go to climb on and marvel at military equipment, and in this role, it definitely doesn’t disappoint. The place is full of fighting machines, from historical cannons to the RT-2PM Topol, a massive mobile intercontinental ballistic missile launcher, complete with (mock?) missile.

Kids, and more than a few adults, were climbing on the artillery pieces near the entrance and posing for pictures. Bunches of people walked around, checking out anti-aircraft guns, spinning Topol’s wheels, or watching a free concert set up in the middle of the outdoor museum for Museum Night.

I thought these anti-aircraft missile launchers only existed in video games.

Even cooler than the tanks, though, were the running battles in the museum’s backyard. As part of the Museum Night festivities, reenactments of Russian military history up to World War II were staged in a large treed yard, dug through with trenches and strung with barbed wire.

Sadly, we were only able to watch the World War One reenactment, but it was plenty awesome. Spectators cheered as Russian soldiers charged out of the trenches, guns spitting fire, cutting down German soldiers.

After the Russians won the battle, kids quickly ran out onto the field, looking for spent casings and mingling with the soldiers. Everbody else soon joined, check out the trenches and hopping the barbed wire. With lawsuits and such, I’m adding this to my list of things that work a bit differently in America.

We walked around after that, mingling with fake Nazi soldiers, knights with swords and shield, and even mock American soldiers from World War II, speaking Russian and some hilariously broken English.

As I wrote about yesterday, we were planning on going to a bunch of museums as part of the Museum Night event. But, as you can probably tell, we spent a whole lot of time at the Artillery Museum.

This was not entirely by choice. We had planned to start the night at Dostoevsky’s house, a museum/tribute to the famous Russian writer. But although Dostoevsky’s house was participating in Museum Night, tickets to the event were not being sold there, a fact that wasn’t in any of the Museum Night stuff we had researched online.

So we went to a Russian pizza place, and then took the metro over to Petrogradsky Island, site of the Peter and Paul Fortress, Artillery Museum, and a bunch of other museums we had planned to visit.

But the metro stop right by all the museums, the one we had planned to get off at was ремонт, or under repair—which we discovered only as our train sped through the darkened station (My roommate Tom wrote about the significance of ремонт in Russia on his blog.). We got off at the next station, still on Petrogradsky Island, but a mile walk to the museums.

Luckily, getting off at that station earned me my first picture with Lenin, which pretty much made the walk worthwhile.

Me and Lenin. In Russia, people don't smile for pictures.

The State Memorial Museum of the Defense and Blockade of Leningrad

A million Leningraders died during the 900 day siege of the city during the Second Great Patriotic War. Some starved, some froze, and some were killed by German guns and bombs.

The siege plays a heavy role in the city’s collective memory. I’ve already written about Victory Day, but beyond that single day, memorials to the dead and reminders of the city’s heroic sacrifice are everywhere. Incidentally, there was even one on the wall of the movie theater we went to after we left the State Memorial Museum of the Defense and Blockade of Leningrad.

The museum itself is contained in a plain building, across a canal from the flashier parts of Petersburg. The exhibits—old Soviet and Nazi German uniforms, maps, guns, photos, letters, and lots of other items—line the walls of a single large warehouse room. Massive paintings of battle scenes and Soviet leaders sit higher on the walls, above the exhibit cases, framed by large gray curtains.

I was amazed by the sheer concentration of World War II stuff in the museum, although I couldn’t read most of it. There were photos of the Soviet leaders I’ve read so much about, including a particularly cool one of Gen. Eisenhower and Georgy Zhukov, a Soviet Marshall who led the Red Army to Berlin.

There were also plenty of weapons, from AK machine guns to partisan bolt-action rifles—and even an anti-tank gun—and a bunch of bombs and mines. As for uniforms, there were some Soviet ones (from what I could tell, they had belonged to Heroes of the Soviet Union) filled with medals and ribbons, as well as some Nazi ones, including SS uniforms with lightning bolts and Totenkopf, or Death’s Head skulls.

Between the military paraphernalia, there was a reconstructed blockade-era apartment flanked by photos of people living day-to-day, looking just slightly healthier than concentration camp survivors. The only sound was the ticking of a metronome on the radio—the beating heart of Leningrad.

There was also propaganda… Lots and lots of propaganda. I gotta say, I loved it. I mean, who doesn’t love Nazi soldiers portrayed as either evil or incredibly stupid? The great thing about propaganda, too, is that it’s mostly visual. So while we couldn’t figure out most of the words, the meaning got through (It helps that the word for fascist is pretty much the same in Russian).

One that was particularly amusing involved three panels:

We’re planning to go back and get an English-language tour of the museum at some point so that we actually understand what’s going on a bit more.

Tonight is Museum Night in St. Petersburg. 150 Rubles to get into a ton of museums around the city—and the museums are open from 6 p.m. to 6 a.m. There are buses running between the museums all night, but we need to be back on our island before the bridges go up around 1:30 a.m.

Also – Kirov’s apartment. The assassination of Sergey Kirov in 1934 (incidentally in the Smolny Institute, where we go to school every day) helped start Stalin’s purges.